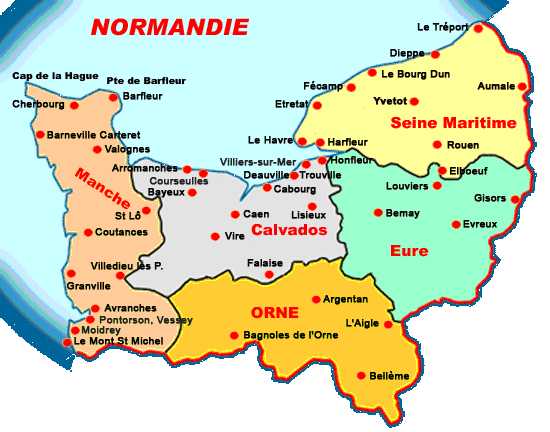 Normandy is a region. The regions have their origins in the old provinces of France. They are today territorial collectivities, with their own elected representatives. In 2016, we went from 27 regions to 18, 13 being in Metropolitan France, and 5 overseas. Each region is divided into departments, Normandy has 5 departments.

Normandy is in the north-west part of France, covers 29906 km², and has 600 km of coastline on the Channel (not the "English Channel" mind you, we're in Normandy, it's not English on our side and actually we call it "La Manche").

We have borders with Brittany, the Loire Valley, the suburbs of Paris, and North of France.

The average temperature is 6°C in the winter and 17,5° in the summer.

The region was "born" in the year 911 when the Viking Rollo was given land to defend against other Viking raiders that theatened the country. The King of France gave him the land around Rouen, to protect Paris that could be reached via the Seine river. In 933, Rollo's son William Longsword then expanded the borders westwards to more or less what Normandy is today.

Normandy counts now 3,3 M inhabitants. The main cities are Rouen, Caen, Le Havre and Cherbourg. The administrative capital of Normandy is Rouen but the political capital is Caen. Both cities have been in turn capitals of Normandy all throughout the centuries and when upper and lower Normandies were regrouped in 2016, it was difficult to choose one unique entity to rule over the region.

There are things you don't understand? Don't panic, you can either ask simple questions, or wait and see, as I intend to explain Normandy to you. Normandy is my region, I was born in Cherbourg, and as I sit here writing these lines, I'm home in Caen where I live today.